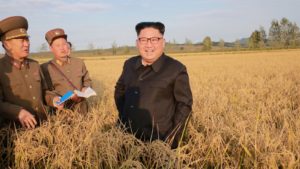 Global warming is causing all sorts of rethinks. The English county of Kent these days has a burgeoning wine industry. There wasn’t a wine maker in sight in my days in London in the seventies. Wine culture at the time meant buying Black Tower and Blue Nun branded German white wines, supposedly grown on the hilly banks of the River Rhine but in reality being chucked together leftovers from previous seasons, bottled for the UK market which was not known for its ability to differentiate between varietals and drank everything put in front of them. Times have changed.

For this reason, one ought to give the North Koreans the benefit of the doubt. If the British can pull off becoming a wine exporter, than why shouldn’t North Korea have a realistic chance of cracking the banana game? Particularly, as they could learn a thing or three from the way United Fruit and others used to operate in the Central American countries, when those countries were  referred to as banana republics.

Their own people would probably be told that the fruit was invented by either the Great Leader, the Dear Leader or the Supreme Leader. That would establish an instant local market share. For the rest – the mind boggles.